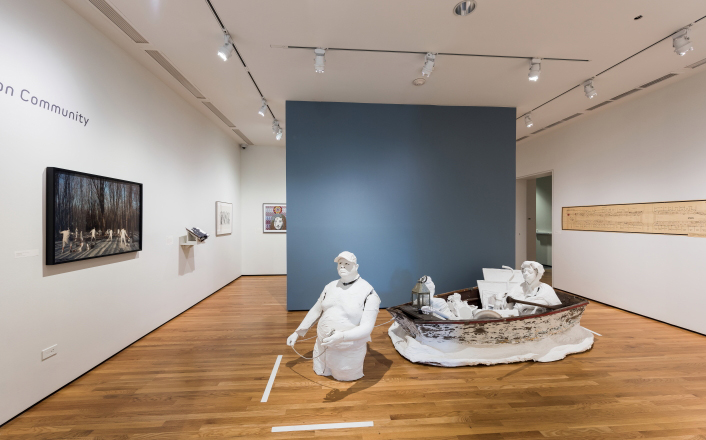 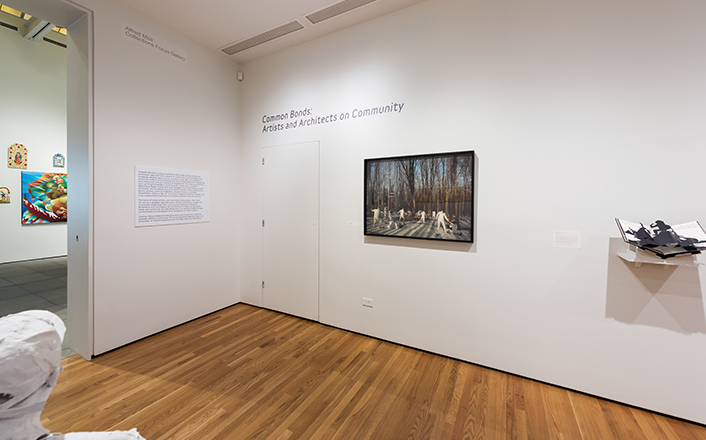 From left to right:
Pipo Nguyen-Duy (b. 1962, Hue, Vietnam)
Swordmen, 2003
Chromogenic print
Gift of Stuart and Joan Levin
Kara Walker (b. 1969, Stockton, CA)
Freedom, A Fable,1997
Pop-up book
Gift of Bonnie Kelm & Bill Malis ,in Memory of Michael Darren Kelm
Kara Walker is an artist who explores race, violence, sexuality, and gender. Her works challenge viewers to confront stereotypes and discriminative ideals embedded in society. Freedom, A Fableis a pop-up book featuring black silhouettes of figures in a Civil War era narrative written by the artist. Although this book appears to be for children, it details the story of a female slave whose life after emancipation is anything but free, and who experiences both racism and sexism throughout the narrative. Freedom, a Fableis not only the title but the underpinning ethos of the book.—Morgan Owen (BA Art History& Global Studies 2019) Curatorial Intern 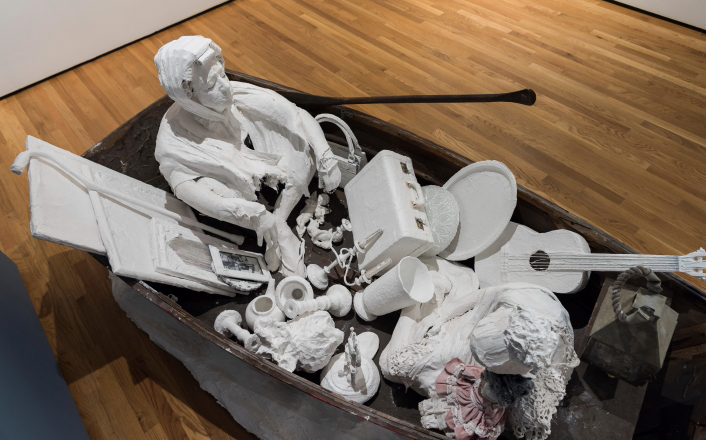 Karon Davis (b. 1977, Reno, NV)
Noah and his Ark, 2018
Mixed media sculpture
Collection of Beth Rudin De Woody
Karon Davis is best known for her life-size plaster sculptures. This work is part of her series Muddy Water that was inspired by the artist’s evacuation during the 2017-18 Thomas Fire. This fire devastated areas throughout Santa Barbara and Ventura counties and forced many to abandon their homes. Noting the number of natural and man-made disasters, which have caused individuals around the world to become evacuees, Davis focused on how those disasters have impacted the Black community in particular. To address that idea, each work within the series is made to look as though the surrounding area has been flooded. As she states: “I started thinking about black bodies being affected by brown water, displaced by brown water, our relationship with water and what’s been going on recently in Compton [where the local agency has delivered dirty water to residents for years]. Muddy waters caused by natural disasters or manmade systems that fail us, whether it’s the levees, the sanitation system or the governmentthat’s supposed to provide clean water to everyone. That is our natural right.” —Morgan Owen (BA Art History& Global Studies 2019) Curatorial Intern 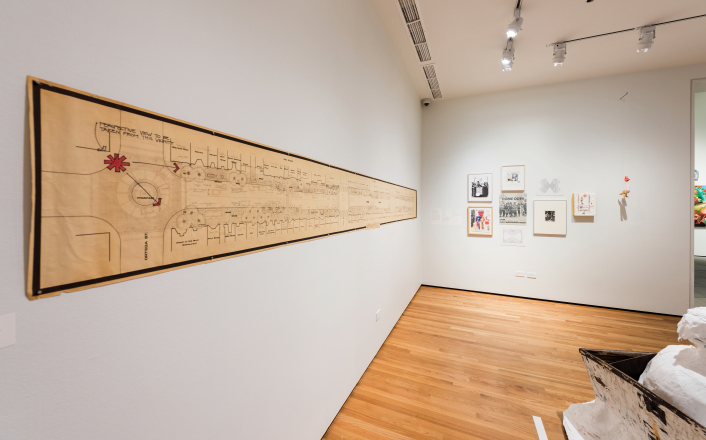 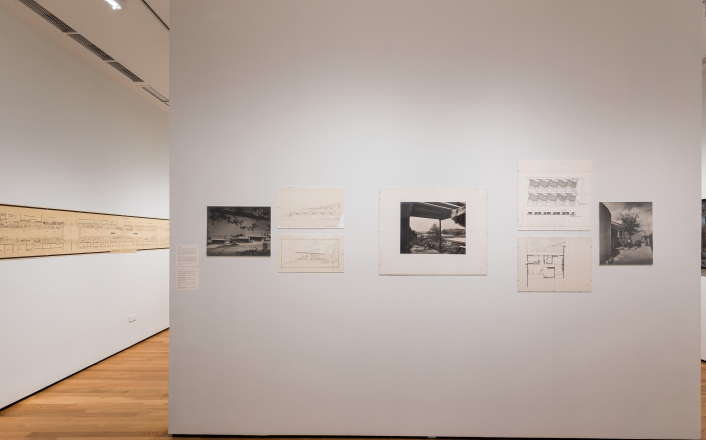 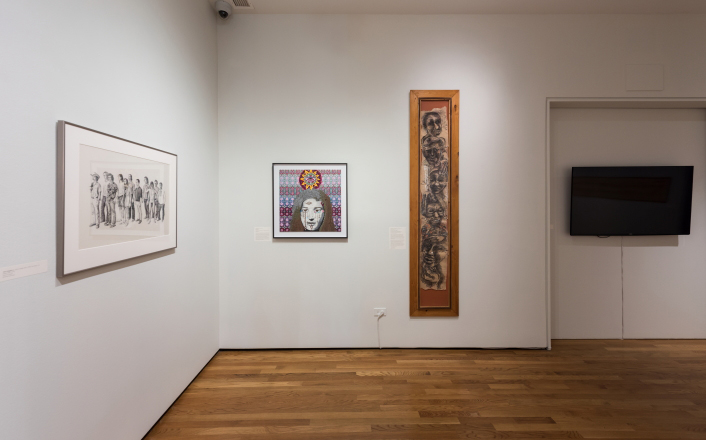 From Left to Right:
Jean Swiggett (b. 1910, Franklin, IN; d. 1990, San Diego, CA)
Eleven Men,1974
Pencil on paper
Museum purchase
Asad Faulwell (b. 1982, Caldwell, ID) BA Art 2005
DJAMILA, 2018
Lithograph mounted on Komatex, with collage, painted map tacks and gold pins
Museum purchase
For several years, painter Asad Faulwellhas been depicting Algerian women who participated in the Battle of Algiers (1956-57). This urban guerrilla revolution relied on female combatants like Djamila Bouhired, pictured here, who carried out attacks against the colonial French population in the hopes of gaining independence for Algeria. This series of works evokes contradictory feelings in himself and viewers. As he states: “The women in the paintings killed people...They killed civilians in the name of freeing themselves from colonialism. They then went through hell themselves. They were tortured by the French soldiers. They were ostracized by their own countrymen. They are victims, aggressors, killers. My interest was in the moral ambiguity of the whole thing.”
Aminah Brenda Lynn Robinson (b. 1940, Columbus, OH; d. 2015, Columbus, OH)
CONTRIBUTORS: Columbus Ohio, from Pages in History, Series 1, 1982
Scroll on handmade paper, pen & ink with watercolor and mixed media, with handmade frame by Tom Panell
Courtesy of Bonnie Kelm & Bill Malis, In Memory of AminahBrenda Lynn Robinson
Although academically trained, Brenda Lynn Robinson was most influenced by the well-known folk artists residing in the Black community of Columbus, OH. Most of her works were created in large series that serve as visual, historical chronicles of both enduring Black communities and those no longer in existence. During a trip to Africa, she was honored with the name Aminah and legally added it to her own. In 2004, Robinson was awarded a MacArthur Foundation Fellowship.
Each work in Robinson’s vast oeuvre is composed of unique, diverse media, from drawings to complex sculptures with found objects and “hogmawg,” her own mud-like bonding agent. Pages in History is composed of 2,000 separate works and focuses on her neighborhood in Poindexter Village. This work, Contributors: Columbus, OH is a “totem” depicting portraits of the Artist’s supporters. Drawn on her own handmade paper and sewn together with cowry shells she depicts, from the bottom up: Robinson’s father (LeRoy E.W. Robinson); Mrs. Ursel White Lewis (Art Patron); the Artist’s son (Sydney); folk artist Smokey Brown, and Robinson’s mother (Elizabeth Z. Robinson). —Bonnie G. Kelm Ph. D. Collector & Consultant 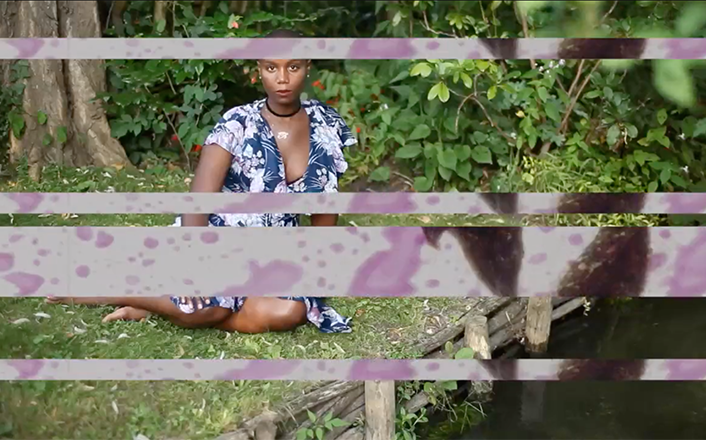 Ja’Tovia Gary (b. 1984, Dallas, TX)
Giverny I (NEGRESSE IMPERIALE), 2017
Film, 6 min., ed. 1/5
Museum purchase
Gary’s most recent film developed out of an artist residency program in Giverny, France where Impressionist artist Claude Monet lived and worked in his gardens. Like her previous works, she employs direct animation techniques, including the application of flower petals and leaves onto the surface of the film stock. Gary’s filmopens with clips of the lush gardens and of the artist variously positioned in this landscape, as well as archival footage of Monet. As the film progresses these more sedate depictions are interspersed with 1960s era footage of Fred Hampton, the Chairman of the Chicago Chapter of the Black Panther Party and
contemporary cell phone footage of the fatal police shooting of Philando Castro during a traffic stop in July 2016. Running throughout the film are off kilter depictions of the gardens showing the landscape at odds with typical vantage points. Giverny Iis both a guttural cry of anguish as well as Gary’s attempt to literally and figuratively reformulate viewers’ characteristic point of view. By doing so, Gary hopes to reveal the implicit structures of power (often white, western, and male) that typically shape our experiences of looking, living and even making art, as exemplified by Monet. As she states, “My videos and films are political, psychoanalytic, and personalized moments of liberation from the anonymous...and distorted histories through which Black life is often viewed.
All installation photos taken by Tony Mastres