In cooperation with the UCSB Department of Music, Jonathan Morgan and the Adelfos Ensemble will be performing in the AD&A Museum's gallery!

Jonathan Morgan specializes in the music of living composers. He’s a founding member and Executive Director of the Now Hear Ensemble and is the violist of the Isaura String Quartet. Jonathan is on the artist roster of the Aerocade Music label, on which he released a recording of Nick Norton's Elegy II and is donating all proceeds from the recording to the ACLU. Jonathan has given world premiere performances of newly-commissioned music at the Society for Electro-Acoustic Music in the United States (SEAMUS), Los Angeles City College, and has performed at the NOW Festival, the New York City Electroacoustic Music Festival, the Eureka Musical Minds of California Conference, Synchromy, the Carlsbad Music Festival, the Roy and Edna Disney CalArts Theater (REDCAT), and the UCSB Summer Music Festival. Jonathan has performed with the Opera Santa Barbara Orchestra and as principal violist of the Santa Barbara Choral Society, Santa Ynez Valley Master Chorale, and as soloist with the Choir of St. Barbara Parish. He can be heard on three albums; My Hope is Arisen, Made in California, and The Lament Cycle. Jonathan holds a B.M. from the Peabody Institute of the Johns Hopkins University, a M.M. from the Cleveland Institute of Music, and a D.M.A. from the University of California Santa Barbara. He served on the viola faculty at CalPoly San Luis Obispo for the 2017-18 academic year and is former faculty of violin, viola, and chamber music at the Preparatory and Continuing Education Department of the Cleveland Institute of Music. Visit JonathanMorganMusic.com to learn more.

The Adelfos Ensemble was founded in 2004 as a men’s a-cappella ensemble and pursued that path until 2010, when it became a mixed voice choral ensemble. Temmo Korisheli took over direction of the group from Dr. Michael Eglin in 2008. The ensemble's goal is to offer the best of a-cappella and other choral music to audiences in the Santa Barbara area through live performances, radio broadcasts, and recordings. The group programs a broad repertoire of music spanning more than a millennium, from ancient chant and Renaissance motets to folksong arrangements and contemporary works. Adelfos Ensemble exists to explore the wide world of choral literature and, as the Santa Barbara News-Press observed, to “move right and left of center in the choral tradition.”
The UC Santa Barbara Department of Music will present the fourth annual UCSB Summer Music Festival on Saturday, August 10 and Sunday, August 11, 2019 on the UCSB campus. Sponsored by the UCSB Office of Summer Sessions, the festival will feature performances by the Los Angeles-based Isaura String Quartet, violist and UCSB Music alumnus Jonathan Morgan, Adelfos Ensemble, Sahlala Band, UCSB University Carillonist Wesley Arai, dancers from the Santa Barbara community, and UCSB Music graduate students and alumni. https://music.ucsb.edu/news/event/1911 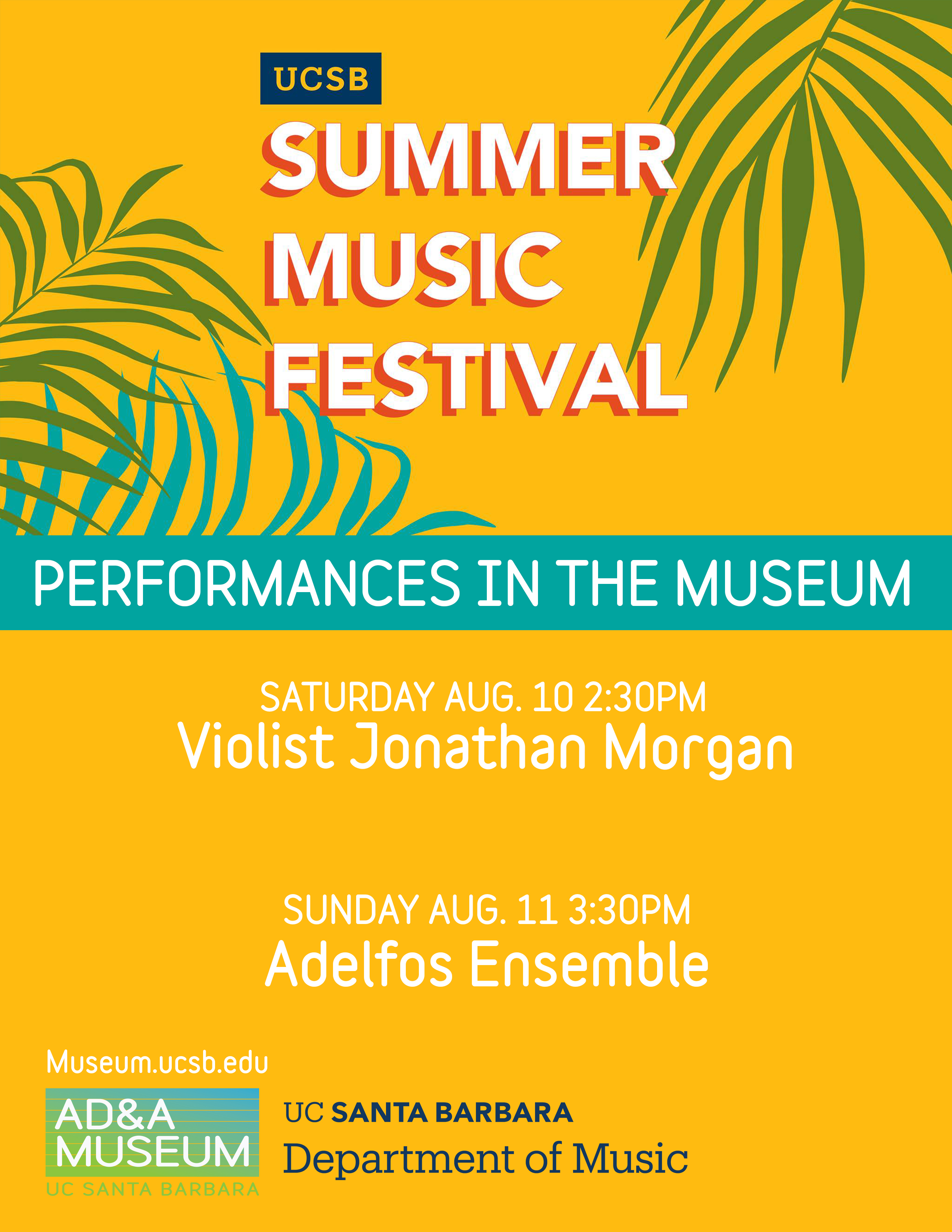